Perhaps the use of sociopetal arrangements or simply designing with clear strategic goals helps to create environments of collaboration.

An article in today's NY Times talk about how Bell Labs used social affordances in their quest for innovation.
From the article: 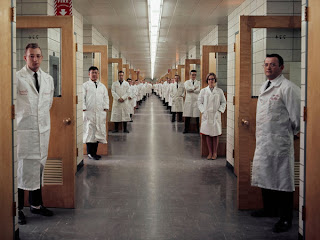 Elliott Erwitt/Magnum Photos
"ONE element of his approach (Mervin Kelly's) was architectural. He personally helped design a building in Murray Hill, N.J., opened in 1941, where everyone would interact with one another. Some of the hallways in the building were designed to be so long that to look down their length was to see the end disappear at a vanishing point. Traveling the hall’s length without encountering a number of acquaintances, problems, diversions and ideas was almost impossible. A physicist on his way to lunch in the cafeteria was like a magnet rolling past iron filings."

Building schools in NJ can never be easy or clear or without controversy... Christie, I don't trust that you will do a better job fixing buildings than the job you have done "fixing" education in the state... (fixing in his case is similar to "fixing" stray animals...)